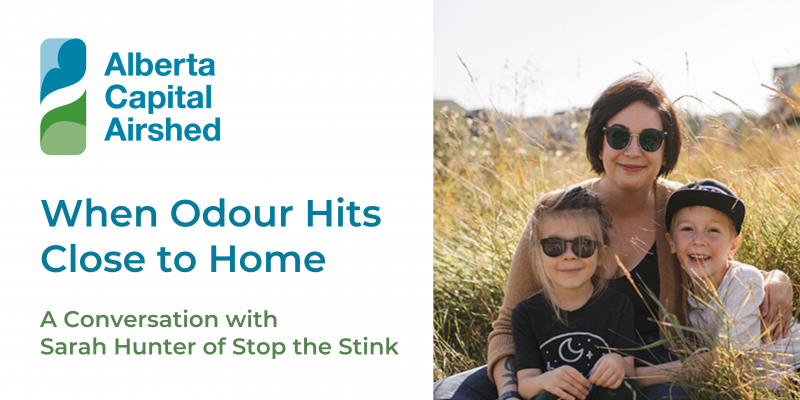 How can communities address air quality issues in their neighbourhoods? ACA recently spoke to Sarah Hunter, from the community advocacy group Stop the Stink, to find out.

Hunter’s Edmonton neighbourhood often had an unpleasant odour wafting through the air. After some research, she realized the source was a local private waste facility. The facility had a history of non-compliance enforcement actions. Unfortunately, these actions had not resulted in any significant changes.

“Grey areas in legislation as well as lack of follow-up caused this issue to continue for over a decade.” says Hunter. As she learned more, her concerns about environmental impacts and worker safety grew.

Hunter wasn’t alone. A group of residents formed Stop the Stink as a way to connect and discuss their concerns. They took action by reaching out to local councillors and members of parliament. The group’s Facebook page became a way to get updates and provide consistent odour reporting.

Stop the Stink’s advocacy progressed over several years. Hunter learned a great deal about air quality. Most surprising was the differences between odour and air pollution. “Alberta Capital Airshed helped the community understand that it can be quite difficult to ‘measure’ for odour” she shares.  As data is an important part of enforcing compliance, this created a challenge for Stop the Stink.

Hunter offers the following advice to communities
in a similar situation:

Eventually, Stop the Stink’s concerns led to the non-compliant facility’s closure. While this resolved odour issues, Hunter says it’s unfortunate the facility had to close. The group was never against composting for waste reduction. Their advocacy was a response to odours, poor practices, and lack of enforcement. For Hunter, the true success of Stop the Stink was the opening of lines of communication. She says “what finally changed over the past few years was consistent communication with all parties involved.”